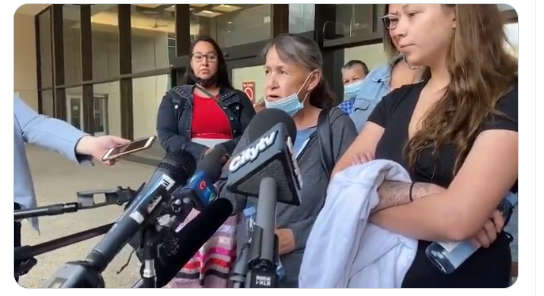 A judge has sentenced Bradley Barton, an Ontario trucker driver, to 12 1/2 years in prison for killing Cindy Gladue a decade ago.

Court of Queen’s Bench Justice Stephen Hillier said Barton will get credit for days he has already spent in custody, so about 11 years remain in his sentence.

A jury found Barton guilty in February of manslaughter in the death of Cindy Gladue, a 36-year-old Métis and Cree woman who bled to death at the Yellowhead Inn in June 2011.

Crown prosecutors had recommended Barton be sentenced to between 18 and 20 years. The defence suggested no more than nine years, saying the Crown did not prove beyond a reasonable doubt that Barton intended to kill Gladue.

The judge said there is no sentence that will bring Gladue back or undo the intergenerational trauma the woman’s death has caused her family.

Outside the courthouse, Gladue’s mother Donna McLeod, said justice has been served but the heartache for the family lives on.

Barton’s lawyer says they will be appealing the conviction.