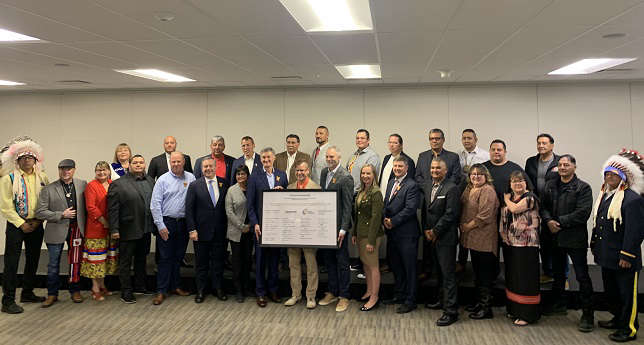 Enbridge Inc. has signed a deal to sell a minority stake in seven pipelines in the Athabasca region of northern Alberta to a group of 23 First Nation and Metis communities for $1.12 billion.

Athabasca Indigenous Investments (Aii), a limited partnership of 23 Treaty 6 and Treaty 8 First Nations and Metis communities, will manage the investment which includes an 11.57 per cent non-operating interest in the pipelines.

Aii said the deal is expected to bring in more than $10 million annually to the communities represented in the partnership.

The Alberta Indigenous Opportunities Corp., a provincial Crown corporation, said it provided a loan guarantee that enabled the communities to borrow the $250 million for their equity stake in the assets instead of contributing their own capital.

The pipelines included in the agreement are the Athabasca, Wood Buffalo/Athabasca Twin and associated tanks, Norlite Diluent, Waupisoo, Wood Buffalo, Woodland and the Woodland extension.

The deal is expected to close within the next month.