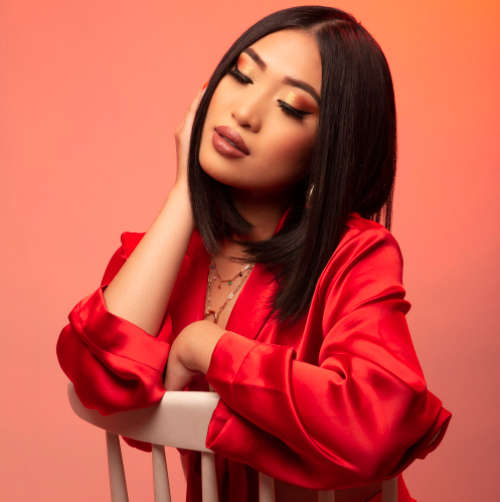 Poised and Powerful Tea G has a voice beyond her years. This Edmonton-based Pop/R&B artist has a maturity and confidence that is unparalleled by her peers. At just 19 years old her vocal athleticism, passion, and elegance have carved her space as an artist to watch. This Filipino-Canadian philanthropist has been lending her voice to hundreds of charity events over the last nine years. Most notable performances would be singing Duets with Canadian Tenors Mark Masri & Adam Fisher, opening for Filipino Artist Triple-Platinum pop band Side A, Triple Platinum Chinese Filipino Singer/Songwriter and Composer Jose Mari Chan and Filipino Pop Sensation Anne Curtis. In 2014 this tenacious young artist took first place in the Edmonton Talent Competition, then again the following year. At 14 years old, she won the ATB Homegrown Talent Competition at Big Valley Jamboree which granted her the opportunity to open for superstar Carrie Underwood and country/pop artist Sam Hunt.  In 2019, Téa G was invited to represent Canada at Asia’s premier entertainment industry conference in Singapore, Music Matters Live by All That Matters, which featured notable speakers including the Executive Vice President, Music Licensing at Universal Music Group and the Global Head of Artist Services at YouTube & Google Play Music. Part of a string of releases from young singer/songwriter Tea G, “See it through” was created with co-writers Alessia Cara and Drake during a session last year. She just released her brand new POP/EDM single “Without You” ft. Brandon Lebrock who is a producer from LA. You can stream it now on all streaming platforms worldwide!