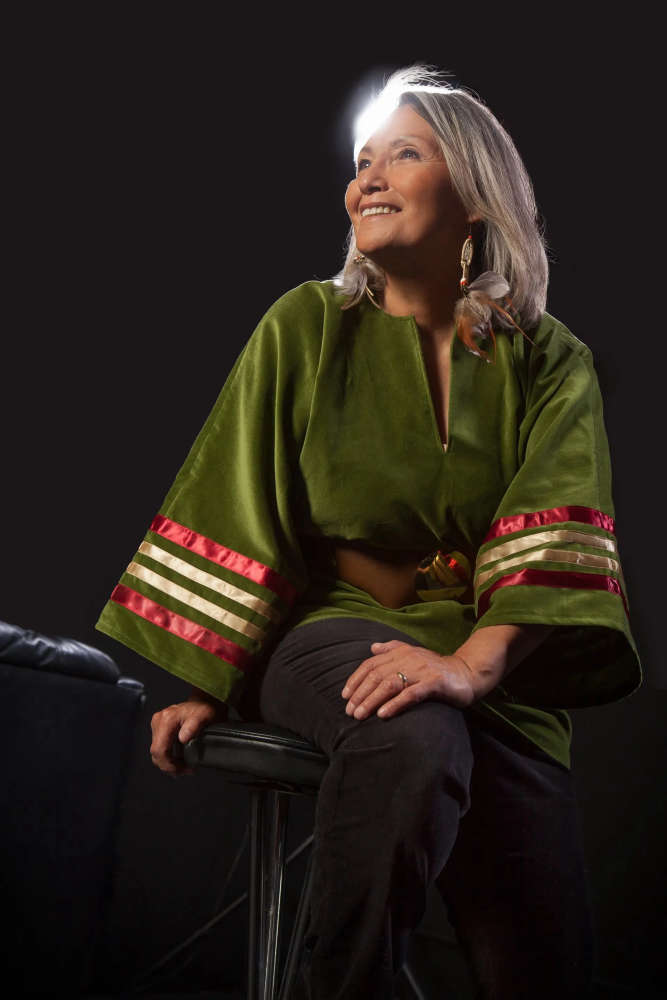 Phyllis Sinclair is Cree, and a Canadian born independent Singer-songwriter. Raised on the Subarctic shield off of the western shore of Hudson's Bay in Churchill, Manitoba, there is no doubt that the beryl expanse of water, long going landscape, and heartiness of her people shaped her deeply affecting, atmospheric and dulcet sound - a sound that Sinclair calls Indie-Indigenous, a combination of folk and indie with a touch of world beat. Called, "a lady of conviction" by Maverick Magazine, Sinclair's pen follows a calculated chart, refusing to be distracted from her vision, or forego her convictions. With five albums under her belt, Sinclair calls on her Cree cultural credo to direct her course of rhythmic prose to an accomplished end. Musicians for a Cause selected her song The Manicure to be included in a 2 disc compilation to aid in Alzheimers research. This song about aging hands was selected out of 35,000 entries worldwide. With awards, nominations, and magazine features, Sinclair writes with certitude, persuasion, and cadenced fact taking her music from Scotland to Australia, and memorable points in between. One of Sinclair's most memorable performances was playing for residential school survivors at the Truth and Reconciliation Commission in Edmonton, Alberta. "It really brought home why I do what I do", she says. "These are untold truths that we all need to hear.” It all all began with her debut album Fence Posts and Stones where her acappella canticle North Coast Fisher Wife's Prayer earned her a feature in Penguin Eggs Magazine, while the song earned the coveted Featured Song spot in that same publication. This song was also rewritten to SATB and entered into the Northwest BC Rotary Music Festival and sung by the Prince Rupert Choir to stirring reviews. Hard Time Hannah, a song about a hard-done-by quasi street person who willingly shared what little she had with others, topped NCI's National Indigenous Top 40 Countdown at #1, and remains one of the most requested songs on that radio station to date. Her follow-up album Fathomless Tales from Leviathan's Hole earned a National Aboriginal Music Award nomination for Best Folk Acoustic Album, while her follow up album to that, Dreams of the Washerwomen earned that same award. In 2014 she wrote a nine song Christmas album titled Wishlist. Wishlist caught the attention, once again, of Maverick Magazine that included her infectious and danceable Evergreen in their Vol. 8, Issue 124 Maverick Music Compilation. Her June 2021 album release, Ghost Bones, made CKUA Radio Network's Top 10 albums, Run Brother Run, a single off the album made the Top 10 on Canada’s National Indigenous Top 40 Countdown. Sinclair continues to write being inspired by her experiences, family, friends, political and socio-economic climate.